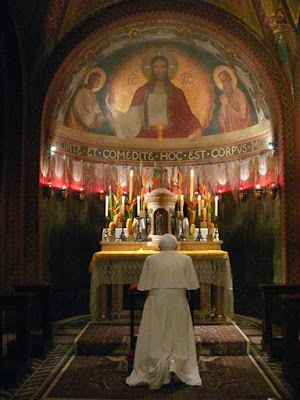 The only way I can have a conversation with my nephews, ages 18 and 12, is if I take away their phones. Even when I do that, eye contact is kept to a minimum and their bodies appear unable to relax without a piece of technology in their hand. Unfortunately, this is becoming true for many adults as well. In our age of smart phones, tablets, and social media, it seems that we spend more time listening to devices than to another person.

As I listened to all of my directees, who varied in age, occupation and vocation, I immediately realized a problem. I was only half listening, while my other half was problem solving. I wanted to give my directees advice, quote something from a saint, or impress them with my knowledge of the Bible and spirituality. If it was a younger person, I wanted to tell them my experience and what happened to me when I was their age. If someone began to cry, I wanted to console them and tell them it was going to be alright. What I really wanted, I realize now, was for them to stop telling their story and for me to start telling mine.

Listening to another person, I learned, means to receive the other person as they are, in their joy and sorrow, happiness and pain, with their strengths and weaknesses, without turning their life into a problem that needs to be solved by me.

It means, essentially, to accept the mystery of the other person, and to allow that person to remain a mystery, without reducing them to our human categories, labels and stereotypes, which, unfortunately, we often resort to.

A few years ago I made an eight-day directed retreat with a priest who had a reputation for being a gifted spiritual director. After we met on the first evening, we had decided that I would pray four hours a day and meet with him each evening to discuss the contents of my prayer. On the second evening I met him in his room and he asked, “How was your prayer today?” I started sharing with him how my prayer was going and I would pause at times because I thought he would want to interject a correction, offer some words of wisdom or give me some advice. He was completely silent. At the end our time he said, “Ok, see you tomorrow.”

Even though he didn’t say anything, I knew that I was sincerely listened to. I did not feel judged, labeled, or analyzed. I did feel, however, accepted, in a way I may never have before. As my retreat continued, our meetings followed the same format. “How was your prayer today?” he would ask, and then I would start talking. Since I wasn’t expecting him to interrupt me anymore, I was given the freedom to explore all that God was doing inside my soul. Without projecting his own experience of God or life on me, I was enabled the freedom to discover my own. Needless to say, a whole new world was unearthed inside of me and through this spiritual director’s listening presence, the mystery of God’s ways and His healing became a tangible reality that I continue to marvel at many years later.

I have come to believe that not only is spiritual direction primarily a ministry of listening, but that life is primarily a ministry of listening. Whether it is prayer, marriage, or friendship, listening to another person—God, a spouse or a friend— becomes an opportunity for grace. Of course there are moments in life when listening may not be enough. A correction, a disagreement or perhaps a command needs to happen. What I have learned, surprisingly, is that even when those difficult moments come along, if I have genuinely listened to the other person, the reception of that correction or command is at least considered more thoughtfully.

The person who is being listened to acquires the freedom and the space to struggle with his life without immediately feeling judged or analyzed. The listener has the opportunity to participate in God’s patient and unconditional love. The challenge for both of them is learning how to do this in a world filled with noise and distraction. The guide for both of them is the One who always listens to us.