Being a Christian is Risky 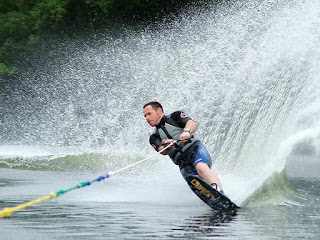 I am glad you’re okay, honey; but I am also glad you took the risk. It’s a good word for a man to hear from his mother. It had been some fifteen years since I wiggled-on a water ski.At the first go, I tumbled hard. The water was as flat as a window pane—cloudy and grey like the evening sky through it. The day had spent itself throwing rain at Lake Hopatcong keeping the boats lassoed to the pilings and the boaters lounging in their slippers. The last raindrops fell late in the afternoon rippling a calm into the water. Nobody seemed to notice but us.

I popped up straightaway at the second effort. Skidding left over the wake, I worked my ski wide, if timidly, through the slick untroubled slate. The speedboat sped me fast into my youth—Buckeye Lake, Arbutus Lake—every lake supported the ski with such unassuming grace. So many clean skies. So many oblong circles. So many spills. It was a game of equilibrium; it was a game of speed.

I tried, vainly (in both senses of the word),to kick up a rooster tail as I cut back toward the middle, tripped on the wake, and cut headfirst into the grey water. I botched the third try; took one more brief spin and, in kindness to my tremulous quadriceps, let the handled fly. It went skipping behind the smalling boat as I sunk easily—exhausted—into the soft and spacious hold of lake. It was quiet in the water, in that grey world, floating.

It wasn’t until I was back in the boat and the tanks were filling for the wakeboarders that our friend noticed blood at the back of my head. I was cut. In one of my tussles with gravity, the ski had bit me. Seven staples later and I was back at the house with a cut of steak on the tines of a fork and several spears of asparagus waiting on the white plate.

Thus, mom’s remark: “I’m glad you’re okay, honey; but I am also glad you took the risk.” There is a lot to be said for taking a risk. For one, on a natural level, it helps us find the narrow road of courage between the wider routes of foolhardiness or cowardice.One has to live the spectrum to know where he stands within it—what a certain situation calls for and what it doesn’t. A second (and related) reason is spiritual. To put it frankly, being a Christian is risky: the body will suffer; the ego, certainly, will suffer; the soul too suffers violence as it pulls away from its sinful inclinations. For the servant is not greater than the Master, and the Master was crucified. And that’s the other thing—somehow, a risk inspires trust—once we stand on the other side of what we thought would be (or even what, in fact, turned out to be) a harrowing experience, there is Christ. Even if we’re bruised or cut or worse, there is Christ with his own bruises, cuts or better.

My skiing accident is no great example of some noble and courageous risk. However, one does learn. There is something just and free in flying across the stillness of a lake on one skidding plank of wood. Something calls forth a whoop from the lungs. And as I made that cut toward the middle, I was seized by the more-than-this-world in this world. And, as it happened, that is when this world cut me. We need not take every risk, but if we fail to take any, we risk living trapped within the confines of our mortality, and that, I think, is a risk not worth taking.