The solemnity of the Immaculate Conception is one of my favorite solemnities (I think I say that for every one, but I really mean it this time!) I used to see this great privilege as something that separated Mary from us: she’s pure, sinless, and immaculate and we’re not.  But if we look deeper, we discover that we are closer to Mary than we realize and her Immaculate Conception gives us great hope. 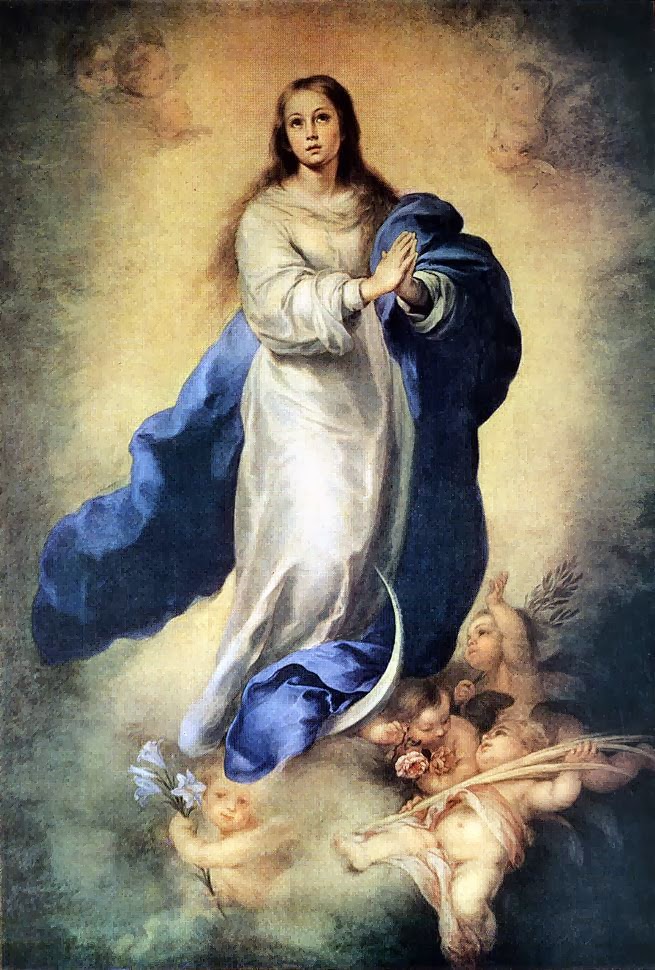 Mary's preservation from original sin was a unique privilege.  No other non-divine human being in history received such a grace.  However, she couldn't have done anything to merit it since it took place at the very moment she came into being.  Like us, she could not even have willed to be conceived, let alone to be immaculately conceived.  This is infant baptism taken to the extreme!  Babies are cleansed of original sin through a baptism of which they are not even aware, much less able to merit.  But Our Lady was entirely preserved from original sin at the very moment that she came into existence, before she was anything more than a single cell; before she had ears to hear the Word of God or a tongue to profess it.  In a sense, she is more saved than a wretched sinner who repents, because Christ saved her from falling into the pit of sin in the first place. What a grace!

The fact that this was a total gift gives us hope because He who preserved the Immaculate Virgin can save us from our sins. Grace, even the greatest grace of being the immaculate mother of God, is not earned or merited. It comes from the overflowing, overwhelming love of God! We must, of course, cooperate with this gift, as she did throughout her whole life. But the gift itself is freely given, and that is great cause for rejoicing! Thus, we can say with Mary: “My soul proclaims the greatness of the Lord!  My spirit rejoices in God my Savior, for He has looked with favor on His lowly servant...The Almighty has done great things for me and Holy is His name!” (Luke 1:46-49)

Love in a Time of Brokenness

I talked to a woman on the phone recently who explained to me how her heart breaks for people—for people suffering knowingly or unknowingly, physically, emotionally, spiritually, for people alone and overly burdened, lost or hopeless, people addicted and helpless—and I believed her.  I believed her strongly, because her voice crawled through the telephone wire like a child through a dark tunnel uncertain whether or not she had to be brave.  She spoke with frustration as if, unruly, her breaking heart merely wished to afflict her, as though it were unfairly painful to her, but I don’t think it was.  So I said in response, “you know, it’s not a bad thing that your heart should break.  This is good.  There’s no need for resilience here; just let it break.”  I said it because I learned it. It was one of the biggest lessons my time in Nicaragua taught me.

I remember clearly rounding the first mountain pass out of Matagalpa in our white pick-up truck shifting gears in my frustration, recalling a teenage girl speak of how she was introduced to pornography at a young age and its ensuing effects.  I learned in that moment that the pain I felt—and didn’t like feeling—was a good pain.  God taught me that in the breaking of my heart other hearts would be healed, and indeed, that for certain hearts to heal mine would have to break.  And somehow on that road from Matagalpa I now loved that little girl not for the pain I felt but I loved her in the midst of that pain and despite the pain and that can be a powerful love. 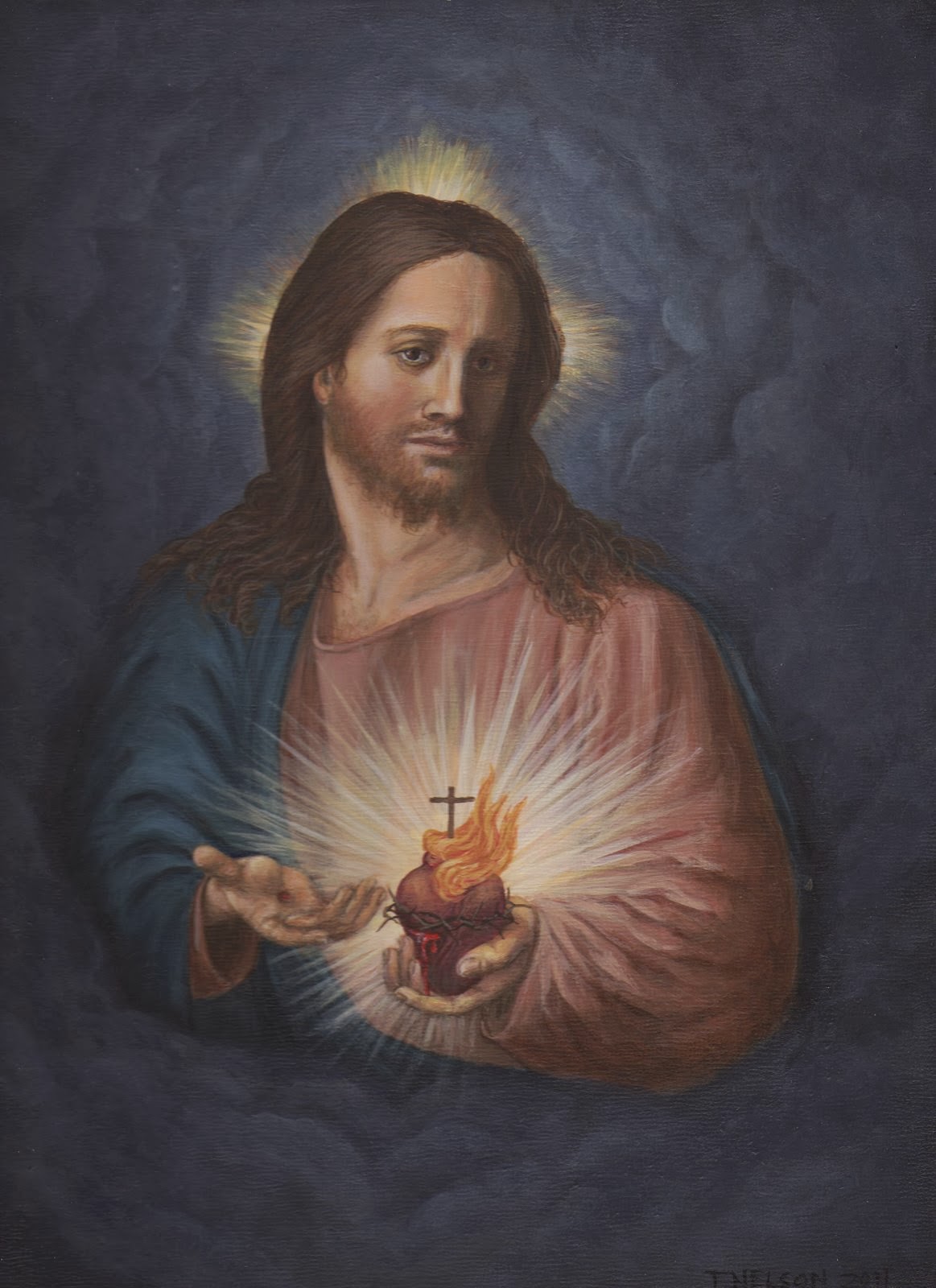 Sometimes, I think, the Lord’s heart must have been in a constant state of “breaking”—certainly in an evident way at his Agony and in a literal way after his death on the cross.  His wounded heart is a great mystery and perhaps has meanings only accessible to angels and saints, but what we can affirm is that by its breaking—the tearing and rending of the Divine Man’s heart—our hearts might be healed.  So I say to those, like the woman who called, whose hearts know too well the sorrow of brokenness, don’t be afraid to just let them break, so that those whose hearts are too hard to break for themselves, may, by your merits, be healed.

The Day After the March For Life

Despite the snow and freezing temperatures, an impressive number of pro-life people made the trek to Washington D.C. for the annual March For Life. We marched on the anniversary of the tragic 1973 Supreme Court decision, Roe v. Wade. It is hard to describe the joyful and energetic spirit of the marchers as they stood up & spoke out in defense of the dignity of all human life - womb to tomb. 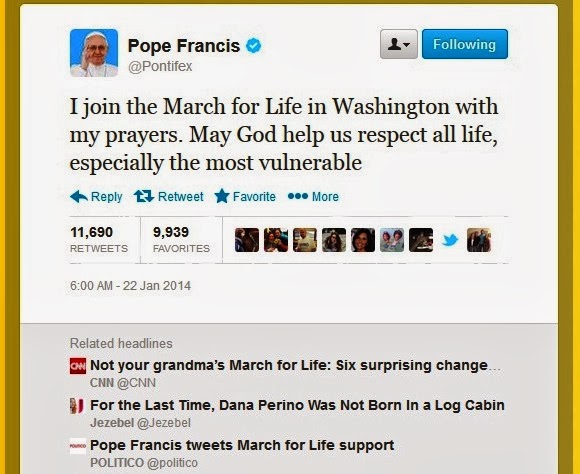 Mary and the Contemplative Gaze


There is nobody for whom salvation was so “intense” as it was for Mary.  She was the chosen instrument through whom the “Word became flesh” (Jn 1:14).  Jesus, the Son of God was also the Son of Mary, and it was from her that Jesus was born and whom he most resembled. 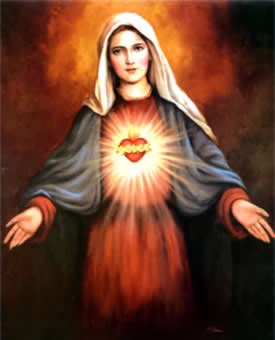 Salvation occurred in her (Lk 1:31), through her (Jn 2:5) and with her (Jn 19:25).  She was Jesus’ closet and most intimate disciple.  Yet Mary, fully human and not divine, was not given a manual to read that explained exactly how salvation would occur nor was she given the gift of understanding perfectly the mind and action of God.

How then did Mary respond to the events of salvation in which she was so close to?  She “kept all these things, pondering them in her heart” (Lk 2:19).  Her life only made sense through a deep pondering of the mysteries of salvation.  Hence, in order to live, to grow and to understand Our Lady developed a contemplative gaze upon God and His mysterious ways.  This contemplative gaze, which has as its foundation, silence, trust, and abandonment does not primarily seek understanding in a purely human fashion, but allows the mystery of God space to grow and mature in one’s heart through faith.

Without a contemplative gaze upon God Mary’s life and our life becomes a series of confusing moments lacking unity and purpose.  It is this deep listening, this pondering of the mysteries of salvation that enables faith to grow into something much deeper and more beautiful than simply human understanding.

The city around me is quiet for a change under the cloak of snow that buried everything with its ten inches of powder; so I am sitting in the front room sipping a cup of tea and finishing the last pages of the Holy Father’s exhortation, “The Joy of the Gospel.” I came upon this powerful line from Pope Francis and my heart was honestly moved to tears: “Mary was able to turn a stable into a home for Jesus, with poor swaddling clothes and an abundance of love.” On the table next to me sits a beautiful little ceramic crèche where the familiar scene of Joseph and Mary gazing on the Christ child draws me into that mystery we continue to celebrate during this Christmas season of the Incarnation (God made man), of Emmanuel (God-with-us), of divine humility (God who chooses poverty), of divine tenderness (God who is a smiling infant).

This line from Pope Francis reawakened in me a sense of wonder and awe before this mystery of what Our Lady was able to do through love, through God’s Love. She brought the “poor swaddling clothes” of her humanity, but was “full of grace,” “an abundance of love,” the Holy Spirit. A stable became a home for God. If she could do this, if God’s love in her heart could transform the ugliness, the poverty, the darkness of that stable into a home, then is it possible He would do the same through me? Through us? Isn’t that the hope and Good News of this mystery we celebrate? Where then are the places of ugliness, poverty, darkness and sin around us? Where is our stable where we can go and bring an abundance of Love with our own poverty and witness again, today, the transforming power of the Incarnation, of Mary’s loving heart, which “turn a stable into a home?” Mary, teach us to believe in the power of God’s love working through our poverty and weakness, give us the hope that Christmas promises.