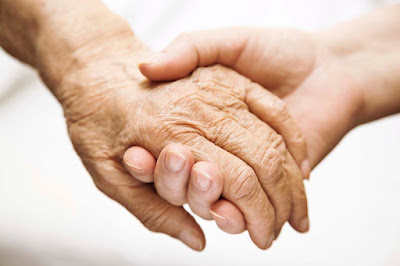 My mother spent the last 15 years of her life in a nursing home suffering from Alzheimer’s. I would be a liar if I said that her disease had not caused my family any suffering or that we accepted it perfectly as part of God’s mysterious will. The reality is, we all suffered and we all questioned how God could allow this to happen to somebody each one of us desperately needed.

An unfortunate consequence of Alzheimer’s is that a person’s brain actually shrinks. As the years went by, my mother’s mental state became similar to that of a child. The hard-working, intelligent, and nurturing woman I knew as a boy had disappeared. Physically she looked the same, but when I looked into her eyes I saw a little girl who appeared lost and was trying to find her way home.

When I arrived at the nursing home for a visit all she talked about was going outside to smoke a cigarette. As soon as we were outside, all she talked about was going back inside and vice versa for the whole duration of the visit, which for me never exceeded three hours, but for my father, was often all afternoon. After a few months I gave up hope of hearing her say she was glad to see me, because, I realized, my mother was no longer present.

On certain days she would yell and curse and call the nurses names. In the beginning they would laugh and approach her with a friendly smile, but as the months dragged on and the insults continued they became tired, annoyed, and avoided her as best they could. After only a month or two of working at the nursing home, a new employee quickly learned that my mother was considered one of the “difficult” patients.

Despite all of this, my father continued to visit her every day. He walked into her room, gave her a kiss and brought her outside in her wheelchair to smoke. Once outside he would face the same barrage of questions he answered the day before. “How long have we been married?” “Is Fr. Jeremiah married?” “How much money did I make last year?” “When are they going to feed me?” “What is Tammy’s husband’s name again?” After listening to these questions for hours my father would wheel her back inside her room, kiss her again, and return to his home, alone.

Occasionally, my father got mad and expressed his frustration in words that would have been better left unspoken. These words, I believe, came from a place of mourning and frustration, as he was forced to watch the woman he loved deteriorate in front of him and not be able to do anything about it. Not only had my mother become helpless because of her disease but also now my father was experiencing his own poverty, as he stood before my mom helpless.

Thirty years ago my father promised to love my mother “for better or for worse, in sickness and in health, and to love and cherish her until death do us part.” Could he ever have imagined what those vows would ask of him? Would he still have made them knowing what he knows now? Rather than spending his days entertaining abstract questions my father did something I consider heroic: he was obedient to reality. By choosing to live in reality and not escape through endless speculations of “what if,” “why me”, etc. he proved his love for his wife.

Watching my father through all of this revealed to me an essential component of love: it is utterly selfless. So often we reduce love to a feeling or an experience of pleasure, yet St. Paul reminds us “love does not insist on its own way” (1 Corinthians 13:5). When my father would slip and allow his frustrations to control his actions he would begin again the next day where he left off, at my mother’s side.

If I or anybody else would ever tell my dad that his fidelity to his wife was heroic he would probably look at you as if you were speaking a foreign language. “It’s what love does,” he would probably say. “I had no other choice.” The reality is, he did have a choice. He could have chosen one of many escape paths: alcohol, drugs, work, Internet, food, sports, money, etc., all of which would have provided him with a well-deserved distraction for a few moments. Despite the allure they may have possessed, my father chose none of them.
At my mother’s funeral I read these words of Jesus in the Gospel: “Greater love has no man than this, that a man lay down his life for his friends” (John 15:13). When I heard those words at Mass a deep sense of peace and gratitude came over me. I was peaceful because I believed in the depths of my heart that Jesus’ love, selfless and sacrificial, conquered death. I was grateful because it was my father who showed me what this looked like.

My dear friends in Christ,

It saddens me to announce that due to a recent decline in my health, I am not longer able to keep a public schedule at this time. Unfortunately, talks and retreats that are currently scheduled must now be canceled. Please email: franciscanfriarsnyc@gmail.com with any questions. I continue to be grateful for all the prayers and support and certainly extend my prayers and blessings to you all.

May Christ and His Holy Mother Bless you! 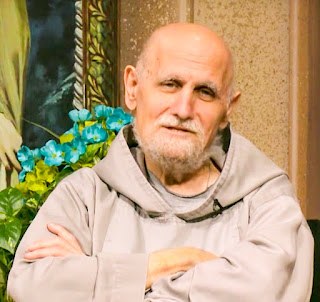 Posted by Unknown at 8:46 PM No comments:

Mass at midnight for the souls was powerful! Thank you to all who joined in and submitted names of your dearly beloved deceased.

🎤From the Friars Podcast for the full story! 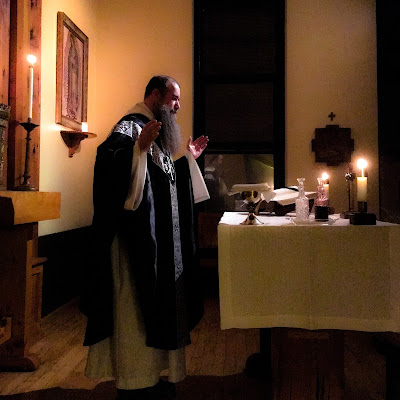 https://player.fm/series/from-the-friars-catholic-christian-spirituality
Posted by Unknown at 9:41 AM No comments: 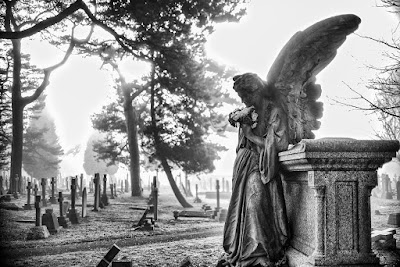 I was 17 years old when I first encountered death.  My grandmother died one night peacefully in her sleep at the age of 84 with a set of rosary beads next to her bed, which she most likely prayed before slipping away into eternity.  A simple woman, she lived on a farm her entire life.  She bore three children, including my mother, and had spent her whole life working hard, going to church, and seeking to unite a family that, as time went on, appeared prone to division.

That morning my sister and I had gone to school like we did every morning.   My mother walked across the street to my grandmother’s farm to make sure she had made it downstairs for breakfast.  Even though my grandmother was declining both physically and mentally, she had lost none of her willpower.

When my mother walked into her house that morning, she immediately knew that something was wrong.  My grandmother was not downstairs sitting in her rocking chair eating her breakfast as usual, and there was no sound of her anywhere throughout the house.  My mother imagined the worst, that she had fallen down the stairs or in the bathroom and was lying unconscious.  But my mom did not find her by the stairs or in the bathroom.  She finally looked in her room and there was my grandmother, lying on her back, hands folded, appearing to be in a very deep sleep.  In fact, my mother thought that she was still sleeping until she moved closer and realized that she was not breathing.  My grandmother had died during the night.

We buried her a few days later at Most Blessed Sacrament Catholic Church in Bally, Pennsylvania, where she spent her entire life as a parishioner.  I can’t remember what the priest said during the homily, and I can’t remember if anybody in my family cried during the Mass.  All I can remember is looking at the stained glass windows in the church that depicted moments in the life of Christ.  There were windows of his Passion, from his betrayal, his scourging, and his carrying the cross to his crucifixition.  The last window showed the empty tomb, filled with rays of light shining from every direction.

Before I knew it I snapped out of my daydreaming because the Mass had finished, and the time had come to take my grandmother to the cemetery.  The ceremony was brief, probably only 10 minutes or so and soon after people began to leave because it started to rain.  Suddenly, at this moment, kneeling on the frozen December ground before my grandmother’s casket, it hit me.  My grandmother was dead.  I would never see her again.  “Never see her again,” I thought.  What did those words mean?  Why did they sound so violent to my ears?

As I knelt there on the ground, tears began to fall from my eyes.

“Is this it?  This must be a sick joke,” I thought.  “Grandma,” I cried out, “Grandma!”  There was no response.  Everything was mocking me:  the hard ground, the casket staring me in the face, and the rain falling from the sky.  I wanted to run away from this dismal place.  But where could I go?  I wanted to see my grandmother again and tell her that I love her.  But I couldn’t.  She was gone.

I knelt there for a long time until everything became silent.  The ground, the casket, even the rain stopped, leaving a calm and quiet presence in the air around me.  I was not accustomed to such silence, and the weight of it quickly overwhelmed me.  I did not address God or even try to speak to him.  Kneeling before my grandmother’s casket, I was speechless before this incredible mystery while questions rattled through my brain: What is the purpose of life?  Why is there suffering?  What is death?  Where do people go when they die?

All of sudden I felt as if I had woken up from a dream.  These questions opened my eyes to something beyond myself.  I was immediately filled with a sense that life has a purpose.  My tears ceased while the sadness in my heart began to dissipate.  I looked up at her casket again and knew that somehow and in some way my grandmother was alive.  A gentle smile began to cover my face.  I stood there for a few more minutes trying to understand this sudden change that had occurred in me.  It was pointless; my mind had failed me.

I kissed her casket a final time and walked with my parents to the car.  As we drove away from the cemetery I didn’t feel the need to look back at her grave.  I knew, in some mysterious way, that she wasn’t there.  I pulled out her rosary beads from my pocket and squeezed them in my hand.  A new set of tears began to form, but this time they were tears of joy.