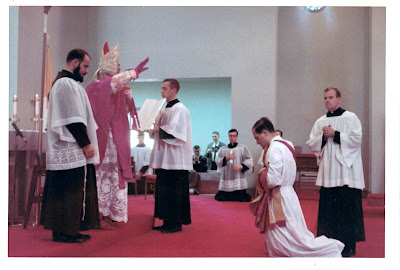 The Homily of Bishop Fulton J. Sheen at the Ordination Mass of Fr. Andrew Apostoli
Given at St. Francis de Sales Church in Geneva, New York on March 16, 1967

Father Andrew, brother priests, religious, parents, relatives, friends of the newly ordained, and all beloved in Christ! One of the great joys of being a bishop is the power of generation! It is given to a bishop to have "sons in Christ" through the power of Ordination...to prolong into another generation sons upon whom he has given the august power of the priesthood!

The powers that are so simply given in a few words are staggering! One of the powers, for example, is to go to the hill of Calvary and take up the cross and—(Bishop Sheen knocks on the pulpit)—plant it down in Geneva, in the Capuchin monastery, in Asia, Africa, or in any city or village. This is the power of offering Mass! It is the prolongation in space and in time of the redemptive work of our Lord. What our Lord did on Calvary, in a certain sense, it was localized. What we do by the Mass, through it, is to apply it all over the world. Our Lord wrote the first note in this melody of Redemption. And by the Mass, we add our notes to it, and this is the harmony of the People of God!

Then...the power to forgive sins! You will never forget your first absolution! You will never forget your first Mass! It may manifest some power to send a man to the moon, but, what is that in comparison to sending sins into nothingness?! A raised hand and a voice: "Your sins are forgiven." And quite even apart from our consciousness of that power, the people themselves feel it and know it when they have received absolution.

Now, may you always, my dear Fr. Andrew, be a good priest! God knows we need it today! Our image is getting a bit blurred. Boys do not want to be priests. Are we sufficiently different from the world that they should want to do what we do? If there is any key to the salvation of the world today, and to the renovation of the Church, it is in the renewal of the priesthood. "The sheep are like the shepherds are" as the Old Testament prophet said: "As the priest, so the people!"

There is a gradual decline of morals and spirituality in the world...a decline even of reverence for that to which your priesthood, on which it centers, namely, the Eucharist! And whenever there begins to be a decline of spirituality in the Church, it is first felt in devotion to the Eucharist. That is where Judas failed, long before he became avaricious in the Gospel. He failed to center his life in the Eucharist. Our Lord lost the masses that day, our Lord lost some of His disciples, and our Lord lost Judas that day. Avarice and other sins follow; they are not always the beginning.

And so, Fr. Andrew, with all of the ardor of my soul, I beg you to continue this great spiritual life that has already been initiated in you by being a Capuchin. You have been trained...more disciplined than the rest of us. It is not only by the Spirit of Christ, but by the great example of Francis who lived that life...in great simplicity.

The emotional thrill of the first Mass will leave, but not the love of being a priest; that grows as the years go on! You are the first priest, I think, that I have ordained since the Council. You are, definitely! I have consecrated about three times as many bishops as I have ordained priests. And so, since you are the first priest that has dropped from my hands since the Council, may you begin to be, with me, the beginning of a sanctified priesthood! You have it already. And sanctification is like health: when we have it, it is easy to keep; when we lose it, it is hard to get back...doubly hard! You are a holy man. You will be a holy priest. And the world will be better because of this day. And because I bow down in reverence to your own personal holiness and to the special kind of holiness which the Capuchins instill in you, I ask you now to come to the center of the altar and give me your, blessing!

https://player.fm/series/from-the-friars-catholic-christian-spirituality
Posted by Unknown at 12:03 PM