My Time With Father Andrew 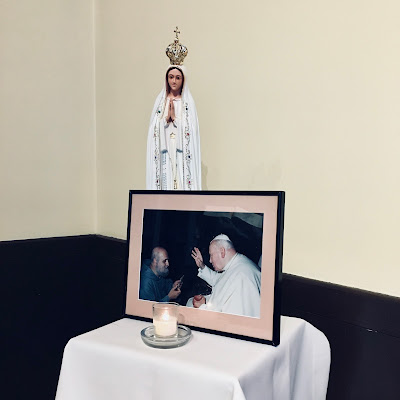 Fr. Andrew Apostoli died on December 13, 2017 after losing a painful fight with cancer. When I heard that Fr. Andrew was dying, the first thing I thought was, “I want to be there.” Somewhat surprised, I paused for a moment to reconsider. “Yes,” I said to myself, “I need to be there.”

Fr. Andrew Apostoli is known to the world as an author, retreat master, spiritual director, and teacher. To me Fr. Andrew is all of those things, but more importantly, he is a humble, prayerful, and joyful Franciscan priest. I am not one of his adoring fans who have read all of his books and watched all of his programs. Nor would I even be considered a close friend. I am simply one of his brothers, who had the privilege of living with him for four years, while I was studying for the priesthood.

After a long day of classes at the seminary, I would see Fr. Andrew arrive in chapel for Holy Hour and think, “now here is a man who lives what I am studying.” Always lowly and unassuming, he dipped his hand in the holy water font and made a reverent sign of the cross. As he entered the chapel he genuflected for a few seconds, head down and lips uttering some words of adoration, before taking his seat in the back of the chapel.

He often called Holy Hour his “Hour of Power.” Since that time before Jesus in the Eucharist was so special, he would often stand during Holy Hour because he didn’t want to fall asleep and “miss” this intimate moment. When I looked back, I would see him leaning against the wall, head down, rosary glued to his fingers, while fighting to stay awake. He was tired of course, because he had spent the whole day, and often late into the night, ministering to others, while always ignoring his own personal needs.

In mid-November the doctors told us that Fr. Andrew had stage four cancer and his life expectancy was three months. Once he received this diagnosis he moved out of the nursing home in the Bronx run by the Little Sisters of the Poor and came back to spend his last weeks at St. Leopold Friary in Yonkers, NY.

I was asked, along with many other friars, to take turns spending 24-hour shifts with Fr. Andrew. The reason for this is simple: Death is the ultimate dark night. No matter how much faith one has, how much one has prayed, or how much theology one has studied, dying, especially with something as cruel as cancer, can be a horrifying experience of utter darkness. Nobody, even the holiest among us, is exempt from such trials.

Even though each one of us dies alone, having somebody with you to attend to your physical needs and pray with you is a tremendous gift. It was the least I could do, I thought, for a man who before he preached, lived every word that he spoke. Perhaps this is why I felt like I needed to be there: it was my way of saying thank you to a man who, though different from me in many ways, lived life so beautifully.

When I was on duty with Fr. Andrew the responsibilities were twofold. Firstly, there were his personal needs. He needed help with everything from food, clothes, to sleeping. Secondly, and most importantly, were his emotional and spiritual needs. Oftentimes he would wake up in the middle of the night and be confused or anxious about where he was or what he needed to do that day. I would just sit with him in his room and remind him where he was and console him with the fact that he was not late for anything.

One afternoon after praying the rosary Fr. Andrew looked at me serenely and said, “Father, I think I’m dying, can you give me last rites.” I called a few of the brothers to join me, said the prayers, and anointed him. With a look of relief he took my hands and kissed them, reverencing not me of course, but Jesus the High Priest, whom Fr. Andrew loved his whole life.