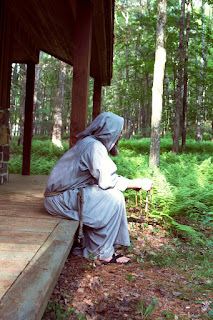 After forty days of solitude and silence, I was convinced I would leave my hermitage a new man.  What exactly I would look like I wasn’t sure, but at the very least I imagined myself a stronger, wiser and more loving person.  I pictured myself returning home to my community, eager to serve the other brothers, willing to listen to everyone who sought my attention and no longer getting frustrated and annoyed when things did not go my way.   After all, I had just done something I once thought was impossible: I spent forty days alone in a hermitage in the middle of the woods.
On a surface level, my days in hermitage were dreadfully boring.  There were no news flashes, text messages or phone calls bombarding me every minute.  Whether I was eating, praying or walking, I tried to surrender each moment to God by simply saying, “Here I am” (Genesis 22:1, Exodus, 3:4, 1 Samuel 3:4).  Whatever occurred next, whether it was a group of deer running through the woods, a fresh snowfall, or a sensible experience of God’s presence, I was learning a key lesson that solitude teaches: God is always near, but we are far away.
Providentially, my retreat coincided with Holy Week and Easter, leaving me an ample amount of nourishment in the Liturgy and the Scriptures.  After the beautiful yet somber liturgies of Holy Thursday and Good Friday, I spent almost all of Holy Saturday sitting by a lake, allowing these mysteries to sink more deeply into my heart and mind.  As I was preparing to celebrate the Easter Vigil that night, I wanted to send a text message to the entire world reminding them that “God so loved the world that he gave his only Son” (John 3:16) or run through the nearest town screaming, “This is how much God loves you.”  Fortunately, I didn’t do either, but another important lesson was given to me: life with God is never boring.

Perhaps my most cherished moments of retreat were the hours I was able to spend in silent prayer.  Each day I would spend, on average, three hours in this contemplative posture before God, not speaking to him in words or even using my mind to reflect on him, but just resting in his presence.  Occasionally, when I experienced a brief pause from the thinking, analyzing and worrying that my mind is usually occupied with, there was a profound stillness waiting for me on the other side.

This stillness of course was not just the result of a quieted mind, but an encounter with a presence whose warmth and gentleness no words or thoughts could contain.  If I was ever experiencing any loneliness or fear, these precious hours of prayer had a mysterious way of reminding me that I was not crazy for wanting to make this retreat, as some believed, but that God had led me here.  Hence, another important lesson was given to me: prayer reveals to us, not our desire for God, but God’s desire for us.
Despite the abundant grace that was poured upon me during this time of retreat, I, for the most part, am still the same person.  I remain, at times, selfish, stubborn and lazy.  Even though I have experienced God’s love on such an intimate level, I am still tempted to look elsewhere for consolation, whether through worldly means, human praise or even spiritual applause.  While spending hours in silence and prayer brought deep peace and joy to my soul, it did not remove the wounds, hurts and pains that have accumulated in my heart during the course of my life.  Regardless of my wants, solitude did not eliminate my humanity and my need for redemption.  Oddly enough, it only affirmed its necessity.
Unconsciously, I had hoped this retreat would get rid of all this human stuff, so that I could move on to more “spiritual” things.  Hence, I was caught off guard, when after the retreat was over I felt, not saintly or angelic, but utterly human.  As I was driving home a part of me was tempted to view this retreat as a disappointment, since this retreat had appeared to produce no immediate changes within me.  I had forgotten, rather quickly, another spiritual lesson this retreat revealed to me:  God’s grace at work in a soul is often imperceptible to our human senses.  Therefore, we must always be slow in judging and evaluating God’s work in others and ourselves.

It would be wrong, of course, to claim that after forty days of solitude and silence nothing has changed.  Transformation has occurred, just not the way I expected it.  I have noticed, since I left the hermitage, that my heart has become more open, less afraid, and more willing to engage the uncomfortable moments of life I once used to flee from.  I am able, thanks to the deepening encounter with God’s love I experienced in solitude, to accept more readily the poverty of my own humanity, which, in turn, helps me to accept more easily the poverty of others.  Finally, I am becoming more aware of God’s presence, not only in the more “spiritual” moments of my life, but in the ordinary, mundane and trivial moments of life in which we all find ourselves.

If someone would have told me forty days ago that this would be the fruit of my time in hermitage, most likely, I would not have been impressed.  These fruits, I would have thought, appear so minor compared to the change I believed I needed.
As I was walking to my car on the last day of the retreat, I did not feel like a spiritual giant, but more like a spiritual beginner.  Instead of feeling holy and spiritually rejuvenated, I felt weak and vulnerable.  Ironically, this weakness and vulnerability didn’t leave me sad or afraid.  Rather, this realization contained a degree of purity and freshness to them, the way a home appears after it has been thoroughly cleaned.  Perhaps during these forty days of retreat, God’s desire was not necessarily to build a new house, but merely to clean the one he had already built.