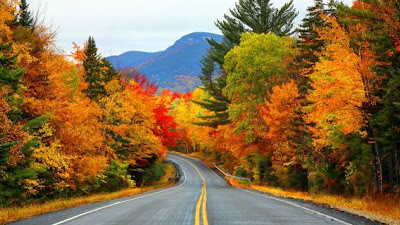 I have lived almost my entire life in the Northeast. Every year a sublime mystery occurs. The leaves begin to sing. Up until now they have been quiet, simply blending in and clothing the trees in their simple attire. But now, in mid October, they are approaching the encore. For the next few weeks these woods will become a glorious spectacle of bright red and orange, yellow and brown. People will take pictures, hiking trails will fill up and artists will attempt to paint this majestic scene while it lasts.

The season of fall provides us with a mirror in which we can contemplate something much deeper than the changing of seasons, namely the mystery of death. Throughout our lives we will experience many deaths. These deaths will be as unique as each person. For some they could come as an illness, a financial problem or the end of a relationship. It could be the death of a friend or parent, a dream that was shattered, or trying to move through a period of depression or loneliness. For others it could be an unappreciative boss or a prayer that God seems to be ignoring. Death, at least according to the rhythm of nature, is not an end but is always a necessary means to something greater.

When my mother first became depressed life as I knew it had ended. A few months earlier, my grandmother passed away, and my mother never recovered. Almost immediately my family recognized a change in my mother. She had lost her joy and her enthusiasm for life. Instead of engaging the family in conversation I would often see her gazing out the window, bypassing our conversation and my need for affirmation. Most of all, my mother, who was always strong and confident in all of life’s details, had now become shattered and torn, unable to stand before the life she once loved.

Before this occurred I was a happy, confident and enthusiastic 17 year old who, almost overnight, became sad, insecure and self-conscious. It was as if an earthquake had struck my family and now I was forced to find my way among the rubble without a guide. After the dust had begun to settle, I no longer recognized my family, my home or myself. My life, at least the way I knew it, had died and I was unable to see beyond the grave.

Ironically, it was this death that eventually led me to a recovery of faith. Since a vital figure in the foundation of my life had been uprooted, I was driven to seek another one, one that when “the rain fell and floods came and the winds blew and beat upon that house…it did not fall, because it had been founded on the rock” (Matthew 7:25).

Encountering the fragility of life at such an intimate level, led me to pray in a way I never had before. Instead of just murmuring prayers I had learned as a child, I began to pray from the very depths of my pain and confusion. Sometimes I yelled at God, asking why he allowed this to happen. Sometimes I cried, begging God for help and strength, while other times I tried bargaining with God, promising to do something for him if he would heal my mother. Despite my persistent efforts to force God to act, her depression only got worse. God appeared, if not deaf, than at the very least, not interested in helping me.

As the weeks and months passed, I began to notice a strange phenomenon occurring. I was beginning to experience a mysterious strength inside of me, one that enabled me to stand face to face with this suffering, instead of running from it as I usually did. In the midst of this heartache, instead of feeling alone and abandoned by God, I began to feel a presence accompanying me on this journey, consoling me and embracing my entire being. Instead of continually asking why, I began now to consider how I could help my mom and be with her in her suffering. Finally, after a long and dark winter, the first signs of spring were beginning to blossom in my soul.

In many ways, I am reminded not only of this event, but also of the many “deaths” I have had to undergo in life each season of fall. Despite how difficult some of those “deaths” were, after each one I experienced in the depths of my soul a resurrection to something more profound than I could have ever imagined. If someone would have told me years ago that God would use my mother’s depression to bring about a deeper conversion in me I would have considered that person a fool. Yet now, many years later, I still remain in awe as I ponder the mystery of God’s ways.

These beautiful leaves that surround me right now are in their glory, but they too must die only to be reborn once again with the passing of time. “Unless a grain of wheat falls into the earth and dies, it remains alone; but if it dies, it bears much fruit” (John 12:24).

Perhaps what scares us most about death in general is that we can’t see beyond it. What will life look like if I lose my job? If I have cancer? If I can’t have the career I want? The truth is we don’t know. But as nature, and God himself have revealed, there is something much greater beyond what we can see and understand, if only we can trust in its rhythm and allow it to take us beyond ourselves.