Mary of Magdala had just the time to run to the Cenacle and to come back to the Garden behind the Golgotha, incredulous, by the lane asleep of Jerusalem. The sun had not yet crossed the top of the mounts of Moab. At her first visit to the Tomb, she had not noticed that the jasmine and the almond tree exhaled a sweeter fragrance than usually, and she had remained deaf to the cheerful song of the bird that, dumbfounded, had seen the stone rolling. 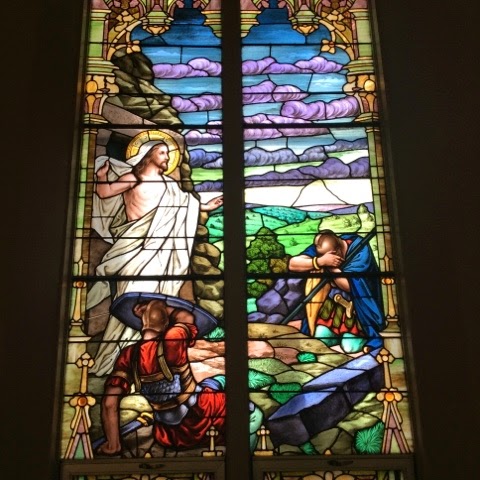 The soldiers, frightened, were already far from. The tomb was empty. For Mary it was obvious and she did not question herself or tried to know more about what happened really: "They have taken the Lord out of the tomb, and we do not know where they have laid him”. . Having alerted Peter and John, she was back to the Tomb. The sun was already high in the sky. Life was resuming in Jerusalem, even if many people were as “knocked out” by the events of the previous Friday. Blinded by her tears, Mary wandered in the garden ...

In the stories of appearances, always the Lord makes the first step. There is first surprise and confusion, then recognition and confession of faith, and finally a mission is given. Todays’ Gospel respects this sequence.
The one whom she searches since daybreak, Mary mistakes Him for the gardener. Jesus has to call her by her name so that she recognizes Him and confesses Him as Her Master. Mary would undoubtedly try to extend this moment, but Jesus puts an end to effusions to entrust her the mission to confirm the Good News of his resurrection to his disciples. So therefore, the first Evangelist was a woman! The sinner with demonstrative love entrusted with the mission to strengthen the unsteady faith of the first companions.

This mission of “confirmation” did not stop on Easter morning. Since 2000 years, men and women had received the mission to proclaim Christ’s resurrection as the core of the Christian faith to their brothers and sisters. It is still ours today. While the faith in Resurrection collapses in the West, including among churchgoers, to the advantage of a vague belief in ”reincarnation” for liberals and “jet-setters”, it is essential to return to the foundations of our Christian faith. Because, as pope Francis put it in his first Encyclical Letter : Christ’s death discloses the utter reliability of God’s love above all in the light of his resurrection. As the risen one, Christ is the trustworthy witness, deserving of faith (cf. Rev 1:5; Heb 2:17), and a solid support for our faith. "If Christ has not been raised, your faith is futile", says Saint Paul (1 Cor 15:17). Had the Father’s love not caused Jesus to rise from the dead, had it not been able to restore his body to life, then it would not be a completely reliable love, capable of illuminating also the gloom of death. (2)

With the all Church, we have fifty days to rediscover our faith in Christ’s Resurrection and to build all our life on this unshakeable corner stone.