The Fulfillment of Encounter: Eating the Flesh of God

Given Catholic teaching, it is not surprising to learn that a common accusation against early Christians was that of cannibalism.  Non-Christians were not allowed to the whole of Christian worship, but rumors spread about phrases caught like eat my flesh and drink my blood, and in some ways it’s not an outlandish accusation but upon further scrutiny it’s just not applicable.  Eating the flesh of a human being is a very different thing than consuming the body of the living God.  One reduces men to animals, the other elevates man beyond angels. 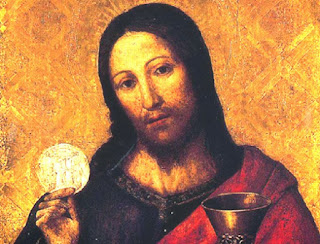 Jesus is very clear in the sixth chapter of John’s Gospel, his flesh is true food and his blood is true drink, “whoever eats my flesh and drinks my blood remains in me and I will raise him up on the last day.”  Sounds pretty important, right?  In fact, he was so clear about it that he lost a large number of disciples over it.  They left.  This is a hard teaching, they said,  who can accept it?  Even the apostles found it difficult to hear, but Peter in a moment of wisdom, instead of leaving, gave the perfect response to difficult teachings, “to whom else would we go? You have the words of eternal life.”  You see, the temptation is to take all the things we like about Jesus and run with them glossing over that which challenges us.

When I first heard the idea, I have to admit it sounded ridiculous, but I knew that if it were true, I could not be any closer to the Lord than to receive him into my very being, and I knew that if it weren’t true then Catholics were worshipping a piece of bread, and this is a very bad idea.  It turns out its true.  Jesus unites himself to us through this sacrament in a way that provides for a foretaste of Heavenly communion, the union with God that is the goal and joy of the Christian faith isn’t something we have to wait for, salvation isn’t something that comes after we die; eternal life isn’t something to be hoped for only after this valley of tears but amidst it.  We live eternal life now because Jesus is made known to us in the breaking of the bread and as he himself said, “eternal life is knowing [God] and him whom he has sent.”